Your hosts, Susan and Tony Hewitt, invite you to their peaceful, non smoking, octagonal retreat just a short distance from the coast and surrounded by beautiful countryside on the edge of the North York Moors National Park and 3 miles north of Scarborough. They have owned and run the guest house since 1995, and since that time have improved, and are continually endeavouring to improve this unusual building, both inside and out.

Tony gained a City and Guilds qualification in garden design, which has helped him make great improvements to the gardens both in planting and hard landscaping, although this is a continuously ongoing project. Prior to taking up the challenge of the hospitality trade, Tony was a qualified Scout Leader for over 10 years and prior to this gained the ‘Queen Scout Award’ (similar to the Duke of Edinburgh Gold), all of which gave him his cooking basics. He was a civil engineer and surveyor for 25 years which has put him in good stead when designing and building the new additions to the property.

Susan has worked in Personnel Management with Intercontinental Hotels in their London and Hamburg hotels, as well as the Executive Headquarters in Paris for hotels in Europe, Middle East and Africa. She has also worked in the commercial and health fields.

In 1990 Tony hung up his racing leathers after winning the Motorcycling Sidecar World Championship for the third year in a row with his partner Steve Webster. Soon after Steve and Tony were both awarded the MBE for ‘Services to Sport’. Now life is on a different track in comfortable, peaceful surroundings and we very much hope you will enjoy ‘living in Harmony’ during your stay with us. 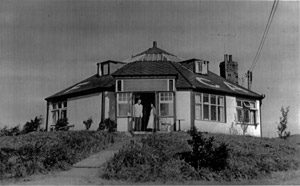 Harmony Country Lodge was originally built by Charles A Earl, an American, who settled here after the First World War. He paid £500 for 12 acres of moorland before erecting the building. Most of this land was subsequently sold off leaving the present 1.5 acres. It was originally called Roundhills, but known locally as the ’round house’ due to its unusual octagonal design. From an original single-roofed bungalow the first floor modifications were completed about 1960 to give the existing ‘two-roof’ layout. 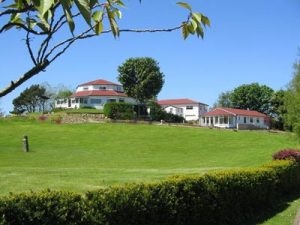 When Susan and Tony bought ‘Roundhills’ in 1995 they changed the name to Harmony Country Lodge and began a process of improvements starting with re-roofing and building the entrance steps. The windows were all replaced and the interior completely re-decorated. Each room was given a name in harmony with the ambience of the house. Tony designed the East Wing, which was built in 2001 and then in 2005 he also designed the building that is now Harmony Church and Healing Sanctuary. After Susan’s interior decor input, this was consecrated on 18 February 2006 and is now a registered place of worship for the Solemnization of Marriage.

The village of Burniston, with its own interesting history nestles in the heart of some wonderful countryside, with the National Park, Dalby Forest, Harwood Dale and the National Nature Reserve of Forge Valley woodlands with the river Derwent flowing through it close by – so there is plenty of opportunity for walking, cycling or motoring tours. The area also offers some breathtaking scenery for photographers, artists and nature lovers.

Scarborough, which is England’s first holiday resort, is only 3 miles away and a drive of less than 10 minutes takes you to the more leisurely North Bay and picturesque Peasholme Park with its pretty boating lake. An oriental themed park offering a beautiful system of streams and waterfalls, mini bridges and gardens, Peasholme also houses a imposing pagoda. There is a vast array of wildlife including an abundance of tame grey squirrels and in summer it plays host to mock sea battles using large model ships, and occasionally stages concerts with firework displays. Ten minutes down the Coast road and close to Peasholme is the new ‘Alpemare’ water park and also the Open Air theatre which I believe is the largest in Europe, seating upto 8000 people and hosting some very big and interesting names. A full program is once again planed for this year.

The now famous television ‘Heartbeat’ country of Goathland (Aidensfield) is only a short drive away, or alternatively it could form a ‘stop off’ from the nostalgic steam train journey between Pickering and Grosmont which takes the traveller through the natural beauty of the North York Moors. Scarborough has been used as the backdrop for a number of films and television programmes, most notably ‘The Royal’. Less than an hour’s drive away on the way to the ancient city of York lies the beautiful Castle Howard where ‘Brideshead Revisited’ was filmed.

Further along the coast is the picturesque village of Robin Hoods Bay with its fascinating smuggling trade history. Whitby, approximately 17 miles to the north, offers a wealth of religious, maritime and literary history. For wildlife enthusiasts, dramatic Flamborough Head lies to the south, with the RSPB reserve nearby at Bempton cliffs. A short walk from the purpose-built visitor centre there is a number of specially-created cliff top viewpoints to take advantage of a wonderful coastline and the opportunity of seeing the massed ranks of gannets, guillemots, kittiwakes and puffins.

For more detailed information about the area and what is going on, visit the Scarborough Borough Council website.